Now that October has arrived and everyone is thinking of the cold weather ahead, don’t forget that yellow jackets are still quite active and more aggressive! Although their yellow and black stripes are similar to those of bees, yellow jackets are not bees. Yellow Jackets are wasps. They are very social creatures, living in colonies that may contain thousands of yellow jackets at one time. 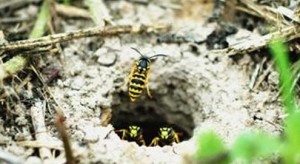 Behavior Changes in the Fall

During the summer yellow jackets are more docile because the colony stays busy collecting insects and producing larvae. In the fall the workers change their foraging behavior, bringing them into contact with people and pets more frequently. They stop feeding on insects such as spiders, caterpillars and flies and turn their diets to sugary food sources such as fruits, ice cream, flower nectar, beer, and soft drinks. Why do they change their diets to these sugary substances? The sugar supplies the developing queen wasps with food so they can mate over winter. But because supplies are limited, the yellow jackets become very aggressive and will sting more willingly.

Homeowners usually have several nests on their property at a time. Depending on the size of the nest, it could have as many as 50 to 100 queens who will venture out in the spring season to start new nests in the same area as the original nest, creating an even bigger problem!

Keep in mind that yellow jackets, most frequently, are ground-nesters and the only way you realize that you have a problem is when you come into contact with them. They are usually discovered during lawn maintenance and may attack if provoked.

What do you do if a Yellow Jacket comes near you?

Avoid yellow jackets when possible. If one flies near you, do not strike at it or run away, as quick movements will provoke an attack. Although humans can outrun the wasps, which have a top flying speed of 6 to 7 mph, you could suffer more than a dozen painful stings before you could run out of range. Also, don’t strike or crush a yellow jacket against your body. This releases an alarm pheromone that can incite a frenzied attack. So what do you do if a yellow jacket is near you? Your best defense is to cover your face with your hands and back away slowly, making sure not to step on a ground nest. Then, go indoors if possible.

Now is the time to get rid of the old nests! By removing or destroying any active nests in the Fall season, you are eliminating the developing queens from starting new nests and colonies in the Springtime. ProActive Pest Management is here for you. Our certified technicians are trained to find yellow jacket nests that you may not see. So don’t try to solve the problem on your own. Call us at (630) 451-8101.