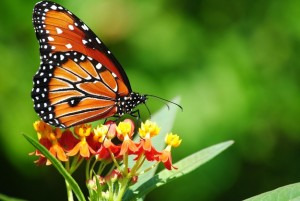 First off, the wing coloration between the insects are generally polar opposites. Butterflies often sport vibrant colors while moths have more drab-colored wings. 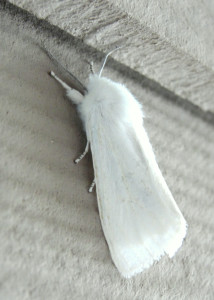 A few behaviors vary between the insects as well. While butterflies are primarily diurnal, flying in the daytime, moths are generally nocturnal, active at night. Along with this fact, butterflies do not have ears and cannot detect sound. However, moths have ears to hear sound, making it easier for them to fly during the dark night hours.

Let’s start with their body shape. Moths need to conserve heat during the cooler nights so they tend to have stout and hairy bodies. Moths also have larger scales on their wings which make them look more fluffy and dense. On the other hand, butterflies can absorb solar radiation so they have slender and smoother bodies. They also have finer scales on their wings.

Their antennae are strikingly different as well. Most butterflies have thin filament-like antennae with club-shaped tips at the ends. Moths, on the other hand, have feathery or comb-like antennae.

Lastly, another anatomical difference is the wing-coupling device called the frenulum. The frenulum joins the forewing to the hind wing, so the wings can work in unison during flight. Moths have a frenulum on their wings, but butterflies do not. It can be seen only when the insect is in hand. 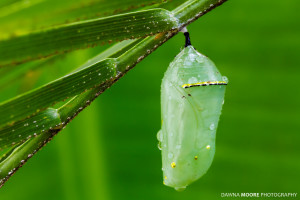 The final major difference between moths and butterflies are their transition periods between the larva and adult, known as the pupa stage. A moth makes a cocoon, which is wrapped in a silk covering, to protect the pupa. However, a butterfly makes a chrysalis, which has a hard covering and hangs from a branch or other means of support to hold the pupa.