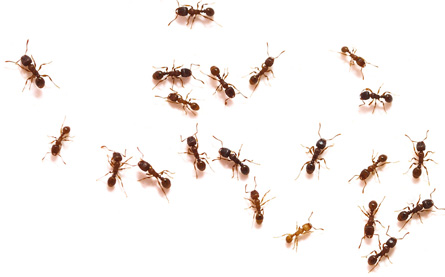 Among the many pests that can invade homes and businesses, ants are one of the most common of
all. These tiny insects are found in all regions of the world, known by many for their large colonies, resilience to eradication, and a particular knack for finding food. If you have ants in your home or business, you may be facing a small or large problem. Ants are often just mild inconveniences, but major infestations can pose severe structural and safety concerns for properties of any size.

At ProActive Pest Management, we are proud to offer comprehensive ant control for properties across Southern Illinois. Our pest experts use the latest tools and technology to stop ants in their tracks with eco-friendly and affordable solutions. Learn more about ants and our industry-leading ant control services below, and contact our team today!

Ants are eusocial insects of the family Formicidae, found on all continents except Antarctica. Like all eusocial insects, ants belong to large groups (called “colonies”) that work together to procure food, build shelter, solve complex problems, and breed. Large ant colonies consist of groups of sterile, wingless females, the bulk of which are workers (called “ergates”), as well as soldiers (called “dinergates”) and several other specialized groups. Almost all ant colonies also have a certain amount fertile males (called "drones" or “aner”) and at least one fertile female (called the "queen" or “gynes”).

There are more than 12,500 classified species of ants. Certain ant species, like the fire ant, are venomous. Most are not. Some of the most problematic pest ants in North America include the leaf cutter ant, carpenter ant, cone ant, needle ant, red imported fire ant, and the army ant. Ants vary considerably in size and coloration. However, there are few distinguishing features that can help property owners identify these tiny insects. All ants have six legs, three body segments, and a set of antenna. Workers are flightless, while male drones have wings. Ants often gather in large mounds or move in organized lines. If you see either near your property, you likely have an ant colony in your midst.

Any colonies can exist virtually anywhere. Ants are quite enterprising when it comes to building their homes and finding food. That being said, ants will gravitate towards easily-accessible food sources. Messy kitchens, uncovered trash cans, and other places where human food is exposed are all prime real estate for ants. In general, poor sanitation is the primary cause of most ant infestations. Keeping your space clean will dissuade ants from entering and will help them leave empty-handed when they do. This will discourage them from building their colonies on or near your property.

Ants may be small, but finding them on your property can indicate a big problem. Ant colonies can pose severe structural and safety concerns for properties of any size. If you spot ants in your space, the first thing to do is clean. The second step is to call our professional pest control experts at ProActive Pest Management. We use the latest tools and techniques to locate ant colonies and exterminate them efficiently and affordably. We use eco-friendly products to keep properties and surrounding wildlife safe, and we offer a 100% customer satisfaction guarantee on all of our pest control services.